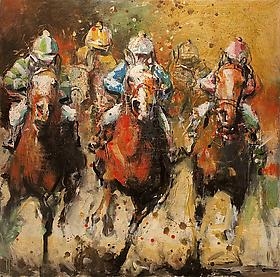 Being chosen as the official artist of the 140th Kentucky Derby is an honor and challenge in so many ways. Horses and art have defined my life for as long as I can remember. I have been an equestrian athlete waiting for the starting bell of an endurance test with my horse on cross-country and I have competed in dressage. I understand the unity between two athletes that is required of any equestrian event. The honor of being selected to paint for Churchill Downs further unifies two great passions of mine, art and horses, at the highest level in the equestrian world.
The artistic challenge for me was to remember what the day really represents and to convey that meaning as honestly as possible. This tradition has been with us for 140 years. Thousands of people have spent countless hours establishing 2 small minutes as a reminder of some simple principles that guide us in the universe. Unity, the pursuit of excellence and honoring those who came before us are some of the principles that apply here. These principles are observed in all cultures and their truths are universal. While working on these paintings I thought a lot about the unity, excellence and tradition that has, over the years, been poured into these 2 minutes. Unity of the human and horse, the evolution toward excellence that we all participate in every day and the observance of tradition, which honors those who came before us. From the discipline of the athletes to the tradition of women dressing like bright flowers in a garden, my goal was to create a unified work that commemorates and honors both the human and animal efforts required to produce such a spectacular event. The 140th Derby week is another opportunity for thousands of workers and beautiful animals to present unity, excellence and tradition on a world stage and I am thrilled to be a participant.